Ireland has a unique salmon-farming sector, the health and welfare of which is paramount. Here, Dr Marian McLoughlin MVB PhD Dip. ECAAH MRCVS, RCVS specialist in fish health and production, outlines the clinical signs, diagnosis, prevention and treatment of salmonid alphavirus, which causes pancreas disease in farmed Atlantic salmon, and the monitoring systems in place to prevent infection and disease

Global aquaculture provides an increasing source of protein worldwide and about 72% of the world’s salmon harvest is farmed.1 Farming takes place in large net cages in sheltered waters such as fjords or bays. While most farmed salmon come from Norway, Chile, Scotland and Canada, Ireland has a small but unique salmon-farming sector, which is almost exclusively produced to organic standards and sold into high-end niche markets worldwide.
To produce this high-quality product, the health and welfare of the farmed salmon are paramount. The control of infectious diseases in aquaculture is one of its success stories. Vaccination plays a large role in preventing both viral and bacterial diseases and it will surprise most people to know that over 300 million salmon in Europe are vaccinated each year before sea transfer to prevent several serious salmon diseases. As a result, farmed salmon have the lowest usage of antibiotics in any intensive farming sector (Figure 1).2

Salmonid alphavirus (SAV) is the viral cause of pancreas disease (PD) in farmed Atlantic salmon in Europe. This unique fish virus was first isolated in Irish salmon in 1994 in the veterinary research laboratory at Stormont in Belfast.3 The virus has six distinct genetic subtypes causing pancreas disease (PD) in farmed Atlantic salmon and sea-reared rainbow trout and sleeping disease (SD) in freshwater rainbow trout and, to date, has only been recorded in Europe.4 Direct costs associated with a PD outbreak in a Norwegian site in 2013, stocked with one million smolts, were estimated to be €7 million.5

Clinical signs
Clinical signs of SAV include: severely reduced appetite; increased mortality; ‘runts’ and poor growth performance resulting from significant loss of exocrine pancreas; and severe cardiac and skeletal myopathies.6 Historically, it has caused up to 43% mortality in susceptible fish populations. There is no evidence of vertical transmission from parent stock.7 PD tends to recur in each successive generation of fish introduced onto a site irrespective of the duration of fallowing period (empty site) suggesting a substantial reservoir of infection in the marine environment4. Clinical disease only occurs where a number of factors including viral challenge load, stress, temperature and possibly other confounding factors interact.

Diagnosis
SAV infection can be confirmed by qPCR (antigen testing)8 of blood (viraemic fish only), and heart tissue,9 histology of affected tissues and non-lethal serology testing (antibody detection).10 As PD is a notifiable disease in Norway, monthly qPCR antigen testing is carried out on all salmon farms in Norway to monitor PD infection, with severe restrictions and even culling enforced on any site(s) outside the endemic zones. The qPCR method requires lethal sampling as the heart is the organ of choice as SAV signals persist up to 19 months post challenge.11   The sensitivity and specificity of the qPCR test and virus isolation is high during the acute phase of disease.11 & 12 It will detect all significant subtypes of SAV and low-cycle threshold (CT) values indicate recent infection but not necessarily PD disease or a viable pathogen as this test also detects virus fragments as well as active virus. Interpretation of CT values requires caution especially high CT values >30. Occasional false positives are possible due to vaccine contamination. Detection of SAV infection by qPCR or serology testing does not always mean PD is present; subclinical or mild disease, especially in SAV2-infected farms and in PD-vaccinated fish is not uncommon. Confirmation of active and significant disease requires the presences of typical clinical signs, histological lesions and a positive qPCR or serology test in the same fish.
In Ireland and Scotland, PD is not a notifiable disease but many farms carry out disease monitoring using qPCR and SAV antibody testing to detect and track infection on farm, plus histological examination and biochemical markers such as CPK to determine disease impact.

Prevention
Intraperitoneal vaccination of freshwater smolts prior to sea transfer with inactivated SAV viral vaccines has been increasingly used across the European salmon farming sector since 2008. Atlantic salmon smolts are transferred to sea each year either in spring or autumn and it takes another 12-18 months at sea before harvest. The fact that multivalent inactivated vaccines can prevent disease for this extended period is pretty unique in the livestock industry. A cohort study of the effect of vaccination on PD in Norwegian salmon aquaculture showed that vaccination against PD has a positive effect in reducing the number of outbreaks and decreasing cumulative mortality and the number of fish discarded at slaughter.13

Figure 1: Fish vaccination was introduced in Norway in 1993 and this graph shows the remarkable impact on antibiotic usage in farmed salmon in Norway.2 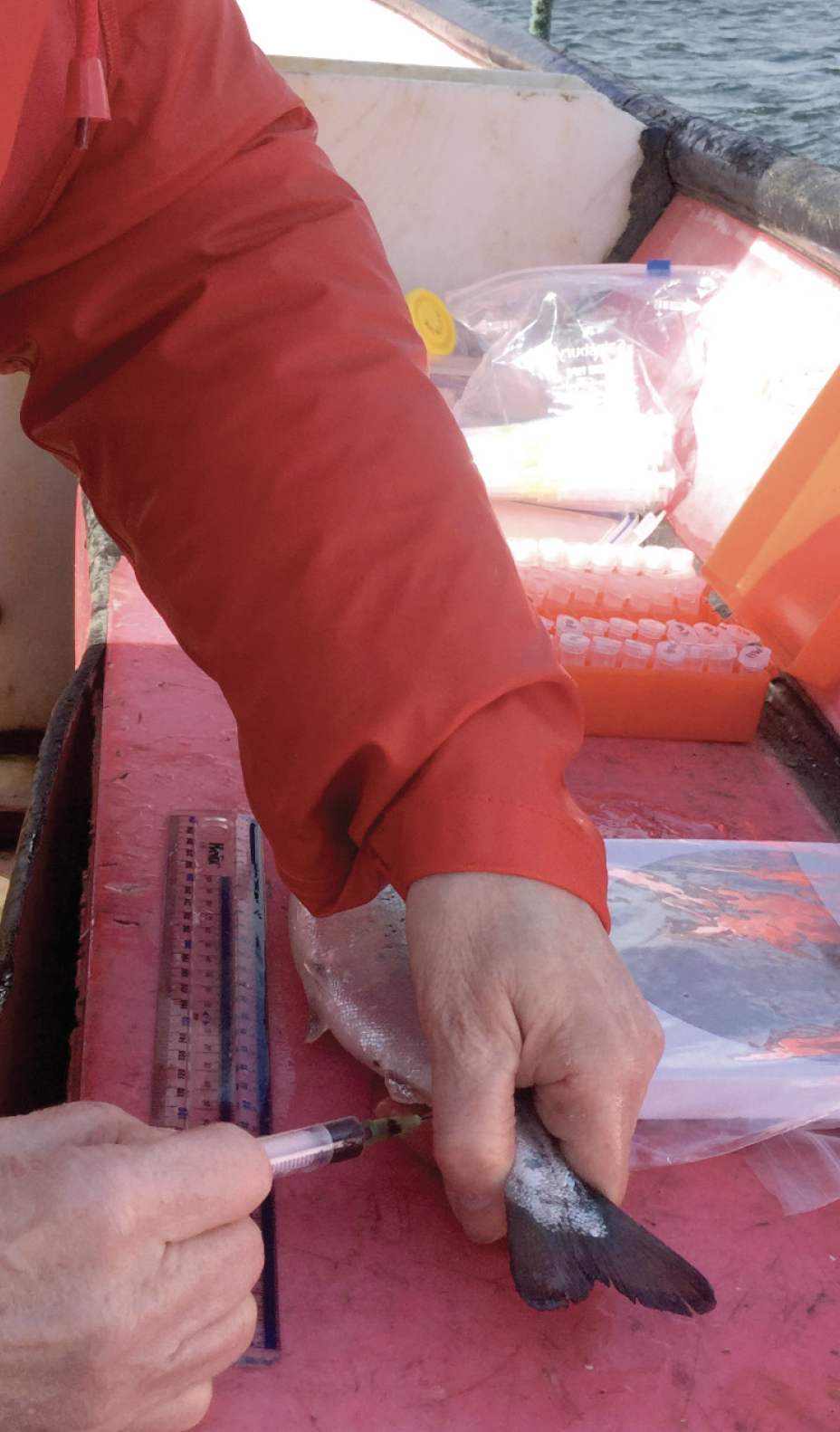 Monitoring of PD in Ireland and Scotland
Regular voluntary monitoring for SAV infection is carried out prior to the disease risk periods on most salmon farms using a combination of qPCR (antigen detection),8 serology (virus and antibody detection),10 clinical biomarkers such as CPK (muscle damage)14 and histopathology of affected organs (pancreas, heart and skeletal muscle).6 Non-lethal blood sampling enables early detection of infection. Fish are usually viraemic for two to three weeks post initial infection and detecting virus in the serum on qPCR indicates a very recent infection on site, which alerts the farm to modify feeding, reduce handling and avoid oral sea lice treatments. After three weeks post SAV infection, increasing numbers of infected fish (up to 90%) develop specific serum neutralising antibodies which can persist until harvest and are an indication of previous infection (Table 2). SAV antibodies cross neutralises with all common SAV subtypes.15 PD vaccines do not interfere with the antibody response to natural challenge, thus allowing the use of the non-lethal testing method for diagnostic purposes. Non-lethal blood sampling is a very cost-effective method of monitoring the presence and development of PD in a pen and on a whole farm basis.
In addition, checking CPK levels in the same samples can detect elevated creatine phosphokinase (CPK) levels which occur three to four weeks post SAV infection and can peak at five to six weeks (80K>) during summer temperatures (14-17oC). CPK levels can be tested using both serum and plasma samples and a single blood sample from the caudal vein can provide very useful diagnostic and prognostic information on individual fish but also across different pens which may be at a slightly different stage of the disease. The fact that serum neutralising antibodies persist from infection until harvest means it can also be used to pick up populations with subclinical and late onset disease if sampled at harvest which may not have been detected by qPCR. Using this combination of clinical tests allows an accurate assessment of the stage and impacts of SAV infection on a pen by pen basis and assists in the careful management of the infected fish and a reduction in its impact improving fish health and welfare.