Septic arthritis occurs infrequently in small animals, and may, therefore, not be considered as a potential differential diagnosis in a juvenile patient presenting with acute-onset monoarthropathy. Septic arthritis may develop as a result of haematogenous seeding of the vascular synovial membrane due to bacteraemia, or from direct inoculation of the joint. Overall, there is a paucity of evidence evaluating treatment options and outcomes in dogs with septic arthritis. Many treatment recommendations have been extrapolated from other species, in particular horses. In neonatal foals, bacteraemia originating from the umbilicus, respiratory or intestinal tracts is a common cause for septic arthritis. In this article, we will review the evidence behind the diagnosis and management of spontaneous septic arthritis in two puppies presenting to our hospital between March and May 2020.

Clinical presentation and diagnosis
Case 1
A five-month-old male St Bernard puppy presented for evaluation of acute-onset non-weight bearing left hindlimb lameness. There was no known history of trauma. On physical examination, the patient was pyrexic (39.2oC), with focal heat, pain and severe swelling extending from the left mid-femur distally. There was severe effusion of the left stifle, with decreased range of motion and pain, along with pitting oedema of the distal limb. Haematology revealed a moderately elevated white blood cell count (WBC 23 x109/L, reference interval 5-16), consisting of a mature neutrophilia. Sedated pre- and post-contrast computed tomographic (CT) imaging of hindlimbs was performed and revealed marked effusion of the left stifle, with joint capsule enhancement. There was myositis and cavitation of the cranial tibial muscle, with secondary cellulitis of the left crus and an enlarged, reactive left popliteal lymph node (see Figure 1).

Case 2
A 2.5-month-old male Spaniel-cross puppy presented for evaluation of acute-onset non- weight bearing right forelimb lameness. There was no history of overt trauma, and forelimb radiographs performed prior to referral did not reveal fracture. On physical exam, the patient was lethargic and pyrexic. The right elbow was severely effused and painful, with pitting oedema of the distal limb. Haematology revealed systemic leukocytosis (WBC 19x109/L, reference interval 5-16), consisting of a mature neutrophilia. CT revealed severe effusion of the right elbow joint, with periarticular soft tissue swelling and a moth-eaten appearance of the right intercondylar growth plate (Figure 3B). Grossly serosanguineous, turbid synovial fluid was obtained on arthrocentesis of the right elbow, with a markedly elevated white blood cell count of 635 x 103/mL consisting of mature neutrophils containing intracellular bacteria. Staphylococcus pseudintermedius susceptible to a broad range of antimicrobials was subsequently isolated on culture.

Overall time from onset of clinical signs to presentation to our referral hospital ranged from three to five days. No associated penetrating wounds or underlying disease was detected. Underlying aetiologies described in other species, such as diarrhoea, pneumonia, dermatitis, otitis, omphalitis, were excluded in both cases.

Treatment
Treatment in both cases was aimed at eliminating and controlling the infection. A through-and-through joint lavage of the affected joints with high-fluid flow 1L of 0.9% sterile saline was performed initially, using multiple ingress and egress portals to allow lavage of the entire synovial cavity (see Figure 3). Amikacin (15mg/kg) was administered intra-articular at the end of the lavage procedure. A second lavage was repeated under sedation after 24 hours.

Both dogs showed significant and rapid improvement in lameness within 24 hours of commencing treatment, and were sound at a walk within the first seven days of treatment. In both cases no recurrence or residual lameness was observed in the medium-term. 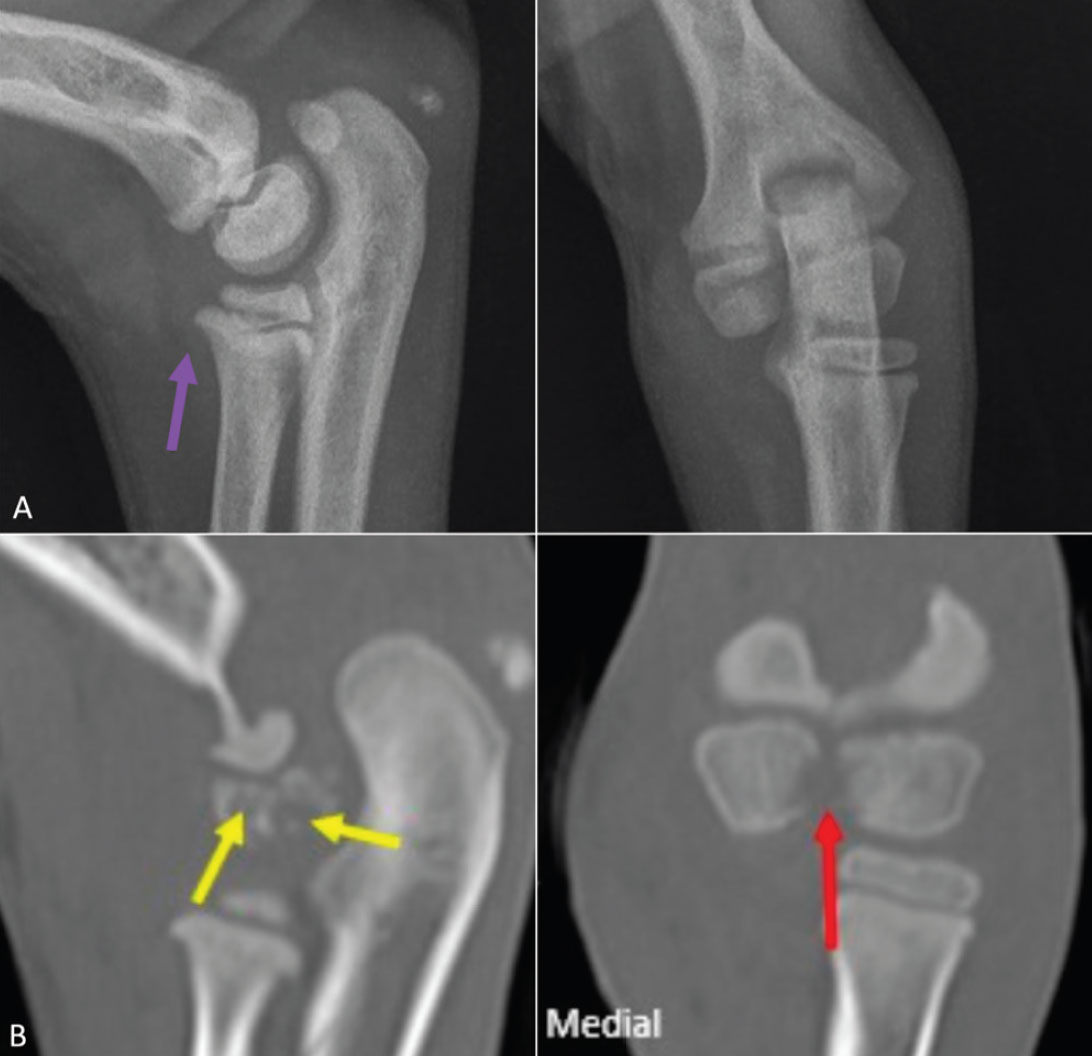 Clinical relevance
Septic arthritis should be considered as a differential diagnosis in a juvenile dog presenting with acute-onset severe monoarthropathy, particularly in the absence of trauma or obvious radiographic findings. Although any joint can be affected, the elbow and stifle joints are more commonly sites for spontaneous septic arthritis in adult dogs. Although no underlying cause could be identified in either case reported here, special attention should be made to rule out potential sources of haematogenous infection by performing full bloodwork and imaging the thorax and abdomen.

Septic arthritis can be challenging to diagnose due to indistinct clinical signs and lack of specific radiographic findings in the early stages of the disease. Early diagnosis is imperative for achieving a favourable prognosis. When septic arthritis goes unrecognised for a prolonged period of time, the severe inflammatory response and resultant release of proteolytic and degradative enzymes can lead to irreversible articular cartilage damage and joint destruction, leading to osteoarthritis. Radiographs are a useful screening tool to exclude other potential causes for acute-onset severe lameness in juvenile dogs, such as fracture or developmental orthopaedic diseases, and to assess for simultaneous osteomyelitis. In cases of acute or peracute septic arthritis, radiographs of the affected joint often do not reveal specific changes. Distension of the joint capsule and soft tissue surrounding the affected joint, fat pad displacement in the stifle and, in some cases, joint space widening due to localised oedema and effusion may be identified. Ultrasonography permits early diagnosis of joint effusion and any periarticular abscesses, as in Case 1; pockets of hyperechoic fluid may suggest septic origin. Although diagnosis can be achieved with plain radiography and joint fluid analysis, advanced imaging in form of CT was useful in both of the cases described in this report; to identify specific pockets of periarticular abscessation in Case 1, and to identify osteomyelitis/septic physitis not visible radiographically in Case 2.

Presumptive diagnosis of septic synovitis relies mainly on clinical presentation of an acutely painful and effused single joint, in combination with neutrophilic inflammation on cytologic examination. Although cytologic identification of intracellular bacteria and a positive bacterial culture are required for definitive diagnosis, these findings are often not identified in even grossly infected joints. The most common bacterial isolates from joint infections in dogs are reported to be Staphylococcus spp, Streptococcus spp, Escherichia coli and Pasteurella spp. Although bacterial isolates were identified in both cases in this report, typically bacterial culture from infected joint fluid is low yield, with <50% infected synovial fluid samples yielding identifable bacterial isolates. This makes targeted antimicrobial treatment challenging, necessitating the use of empiric broad-spectrum antibiotic therapy with assessment of clinical response to treatment. Newer technologies such as bacterial DNA polymerase chain reaction (PCR) have not proven specific enough to identify causative bacteria due to identification of concurrent skin contaminants.

There is, overall, a paucity of evidence comparing treatment modalities for spontaneous septic arthritis in dogs. Based on our clinical experience, treatment protocols in our hospital initially consist of serial through-and-through joint lavage, intraarticular and intravenous antibiotics, and supportive intravenous fluids. Dogs appear less prone to fibrinous deposits and pocketing that would warrant arthroscopic-assisted treatment in other species, such as horses. Broad-spectrum oral antibiotic therapy is initiated and subsequently adjusted as necessary based on culture and susceptibility. Most antibiotics achieve good penetration into joint fluid and bone. In both of our cases, amoxicillin-clavulanate was chosen empirically and continued based on culture and susceptibility. Other appropriate choices pending culture would have include cephalexin or clindamycin. In juvenile patients, fluroquinolone antibiotics should be avoided due to their potentially deleterious effects on the development of joint cartilage. Antibiotic therapy is typically continued for four to six weeks and discontinued based on resolution of clinical signs, along with normalised joint cell counts and negative culture. 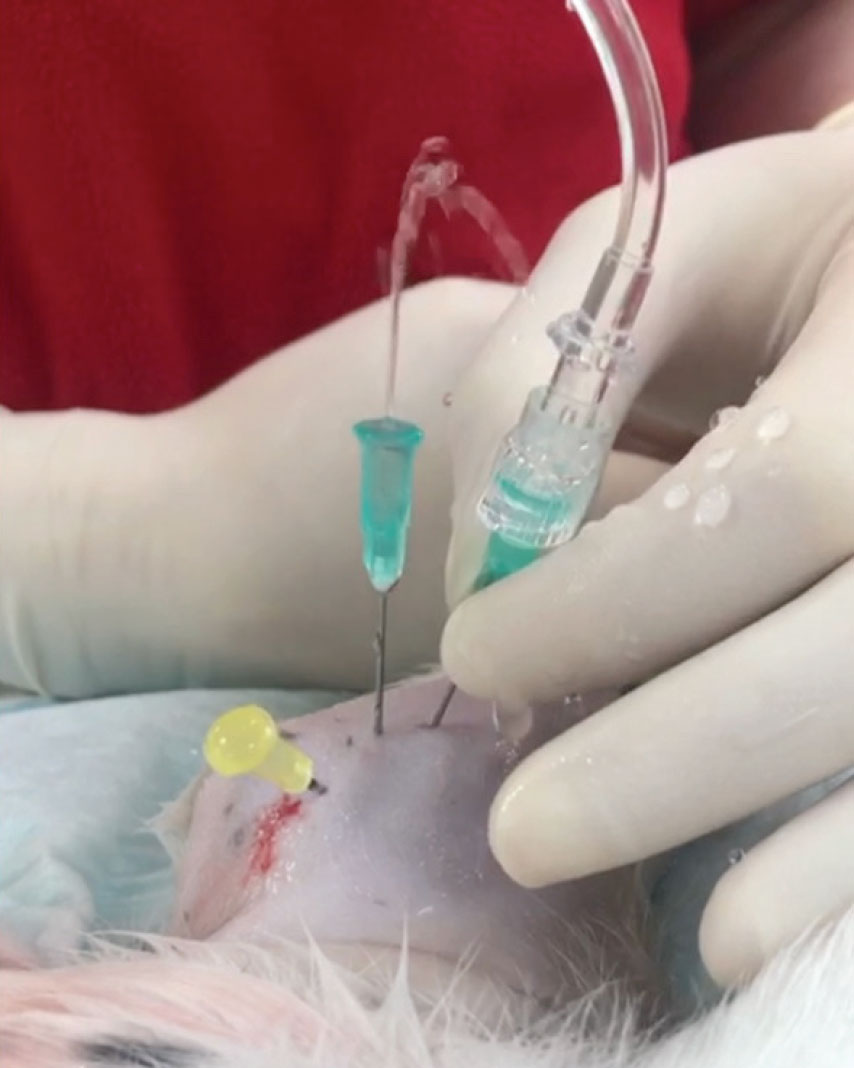 Summary
A diagnosis of septic arthritis should be considered in juvenile patients presenting with acute or peracute onset, severe, monoarthropathy in the absence of trauma or obvious radiographic findings. While diagnosis can be achieved with radiography and joint fluid analysis, CT is a useful modality to identify concurrent osteomyelitis, identify pockets of periarticular abscessation, and to monitor response to treatment. Early, aggressive treatment with joint flushes and appropriate antibiotic therapy often leads to rapid resolution of infection and clinical signs, however, owners should be warned for the potential long-term joint issues.